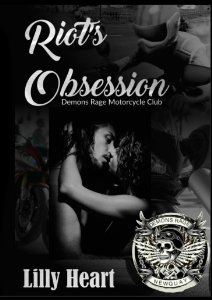 Lady Amy Stratton has run away, escaped far from her stiff world of aristocracy and religion. If she stays she’s forced to marry Cross Acebri, a man from the church who she doesn’t know let alone love, all consequences of her father’s gambling problems. Lord Stratton embezzled close to £400,000 from the parish and not only has money exchanged hands but innocent Amy’s hand in marriage.

But has she landed herself within another cult. A different religion of sex, lust, dirty money, crime, leathers – also with members who are loyal to their preacher, their leader, just like her church…. the Demons Rage Motorcycle Club is no different.

This modern day Motorcycle Club Romance novel told with two points of view is full of mystery, suspense, drama, and a touch of erotica. How does Amy resist the bad boy charms of her best friend’s brother Levi, road name Riot? Is the church itself a front for the underground society? Who is the traitor? What is Amy’s involvement, why is she suddenly accused of being a spy…and who is she really? by Lilly Heart