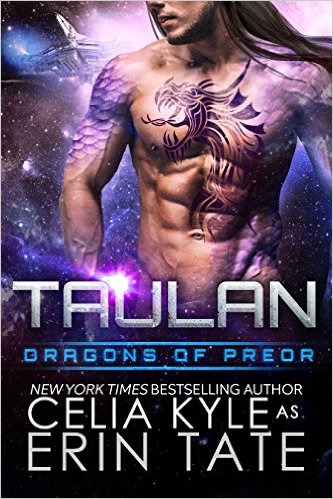 “Loved it! I loved First Warrior Taulan sen Pavon of the Preor. He went through an incredibily traumatic event, the loss of his wings, when the ‘Purist” attacked War Master Jarek and the Ujal delegates. While he struggled with his new reality he didn’t wallow, and accepted support and friendship form Jarek, Melissa and the Ujal. Lana, suffered abuse at the hands of her college boyfriend, but survived, escaped and was trying to make a new life for herself with a new idenity. Jarek met Lana under less than ideal circumstances, he readily defended his mate, even though he feared she would reject him since he could no longer take flight. Lana dispite all she had suffered bravely accepted her new status as a Preor female and mate to Taulan. Loved Taulan and Lana’s story. Loved Skala and Choler, hope they both get a story! Another fun and steamy story from the Ujal universe!” By A M Kavanagh

“Taulan is the second Preor book, Jarek was first. The Preor helped rescue Ujal children and now we have Preor, Ujal and humans mating and starting to have babies. I loved Jarek’s story but Taulan and Lana’s story was awesome. A Dragon who lost his wings due to treachery and an abused woman are destined mates. They learn to love and to trust one another while fighting their own self doubts and the evil of others. I think that you’ll love this book and the series. Plenty of action, lots of loving and several “awww that’s so sweet” moments. Bonus points for both Taulan and Lana get to kick butt and take names. HEA of course.” By J. R. Ratcliff